What You Should Know About the Recent SPAC Boom

Like most people, you’re probably wondering why so many celebrities are suddenly jumping on the SPAC bandwagon.

If you have kept up with the news lately, you’ve probably noticed a trend around celebrities getting involved with SPACs. Athletes in particular seem to have a growing interest in SPACs, with A-Rod, Serena Williams, and Shaquille O’Neal all sitting on advisory boards of these new companies. Other notable names taking part in the SPAC boom are Jay-Z and Colin Kaepernick. Like most people, you’re probably wondering why so many celebrities are suddenly jumping on the SPAC bandwagon, and more importantly, what in the world is a SPAC?

What is a SPAC?

SPAC stands for special purpose acquisition company. It is a shell company, meaning it does not sell any products or services. It is set up exclusively for the purpose of acquiring private companies. SPACs raise money from investors through an IPO and use those funds to acquire a target company which will be made public through the acquisition or merger.

These companies begin by being sponsored by a team of investors, who are often Wall Street professionals. The SPAC then raises money from people that buy into the IPO, and the money is held in an escrow account until the SPAC’s management or board members find a target company that wants to go public through a merger or acquisition. Typically, board members have a time limit of two years to find and make a deal with a target company. If a deal is not made within the time limit, the SPAC undergoes liquidation, and the investors will be paid their money back.

Because the people buying into the IPO do not always know what the target acquisition company will be, SPACs are also known as “blank check companies.” After the SPAC acquires a target company, shareholders can choose to redeem their SPAC shares and receive their initial investment plus interest, or they can swap their shares for shares of the newly amalgamated entity.

Why Do Some Companies Prefer SPAC Mergers Over a Traditional IPO?

When private companies decide to go public, a traditional IPO can be a long, daunting process. The S-1 filing, for example, which is the preliminary filing document for an IPO limits the issuer to include solely historical and factual information about the existing business. Whereas, as an SPAC, the issuer can openly share his business plans and forward looking statements. Oftentimes, the red tape of an IPO can take close to a year to complete, significantly delaying the chance for a company to raise money by selling shares on the open market. However, a SPAC merger is a much quicker process, usually only taking a few months to complete because of the fewer requirements. Additionally, SPAC mergers and acquisitions have fewer costs than traditional IPOs, making them more appealing for small companies.

Why the Sudden SPAC Boom?

Special purpose acquisition companies are nothing new, as they have been around for many decades. However, they have become increasingly popular over the last year as markets hit all time highs in a zero interest rate enviroment. To get an idea of what the recent SPAC boom looks like, the below chart shows how SPAC IPOs have fluctuated over the past 15 years. 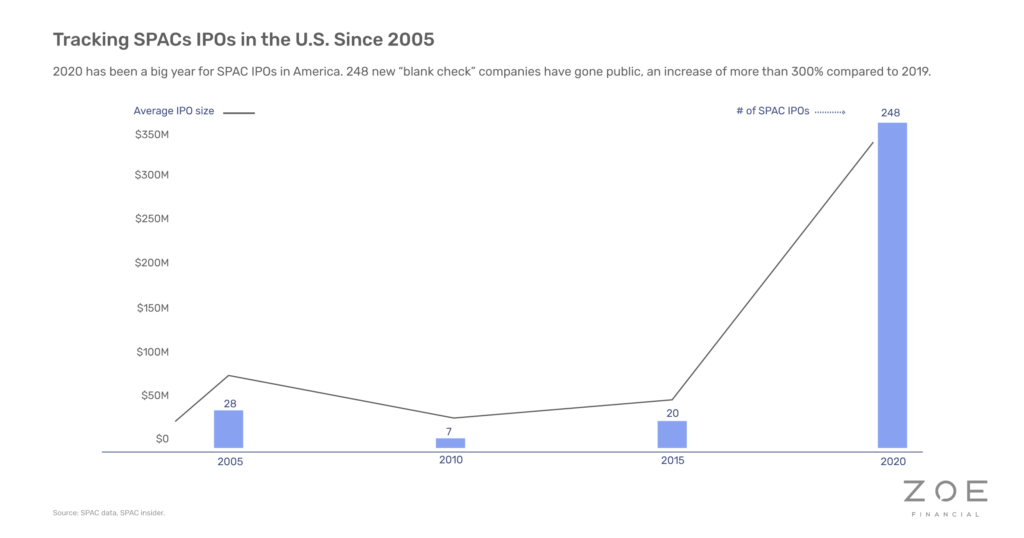 Many companies that were hoping to go public in the last year feared that the market’s volatility could ruin their efforts to raise new funds upon their public debut. The unpredictability of the market made SPAC mergers even more favorable for private companies. Because SPAC mergers are a much quicker process, companies could better gauge what the market would look like when they go public. This can beless risky for the company than waiting to complete an IPO and hoping the market is still in a good place.

Another factor leading to the rise in popularity of SPACs is the recent celebrity endorsements. While some celebrities have created their own SPACs to acquire companies that they believe in or support, that is not the case with every celebrity endorsed SPAC. Oftentimes, the celebrity endorsing the SPAC is not actually making the financial decisions, but instead is on the advisory board as a marketing tactic.

Jim Cramer of CNBC’s “Mad Money” has warned against SPACs being promoted by celebrities with no actual investing experience. The celebrities may just be using their status to attract new investors for their own financial gain. He warns any investors to conduct research on SPACs, their management team, and their track record before making any investment decisions.

How to Invest in a SPAC?

Because SPACs are publicly traded companies, you can invest in them the same way you would invest in any other stocks. And like all investments, it is important to do thorough research on which companies you choose to invest in to make sure they align with your financial goals.

Any type of investment has pros and cons, and SPACs are no different. Some SPACs have done extremely well on the open market, resulting in above average returns after acquiring a target company and going public. But this isn’t always the case. In fact, Renaissance Capital found that the average returns from SPAC mergers from 2015 to 2020 were lower than traditional IPO returns over the same period.

Regardless of what some think about SPACs and the new trend of celebrity involvement, SPACs have grown the last year and are expected to continue to grow. Goldman Sachs put this in perspective: predicting that SPACs could generate over $700 billion in acquisition activity over the next two years.

Before deciding to change your investing strategy or jump on this new investing trend, you should consult an experienced financial advisor to see if investing in a SPAC is right for your goals, time horizon, and financial situation.