In this article: The difference is that wealth is the net worth of a household or person and income is what is reported on the income tax return

As discussed in, We’re the wealthiest we’ve ever been… but who is ‘we’?, Americans are the wealthiest they have ever been as a result of a surging stock market. But this new wealth does not drive consumer spending much since the wealth is unevenly distributed. It turns out that 94% of stocks are owned by America’s wealthiest 10% of citizens. This matters because spending across income groups is uneven, as the middle class spends a much bigger percentage of their overall income than the wealthy.

The main driver of the U.S. economy is consumption. Therefore, an important question to ask is, going forward, what would cause the average American to spend more? Well, there are two options – one is for people to borrow more (which is not ideal) and the other is for them to see their incomes rise. And there lies the rub, U.S. wages haven’t risen much since the 1990s once you adjust for inflation.

An easier way to look at this is to split the economy into three main building blocks:

2) Tools we use to build stuff (Capital)

People, or to be more specific,  labor, has been losing share in the ‘economic pie’ of the United States since the 1970s, as the below chart shows. A driver of this has been globalization as the market for customers and labor transcends borders. This is great news for consumers and business owners; not such great news for U.S. manufacturing employees. Not surprisingly, U.S. corporate profits are now 10% of Gross Domestic Income vs. 5% in 1985. 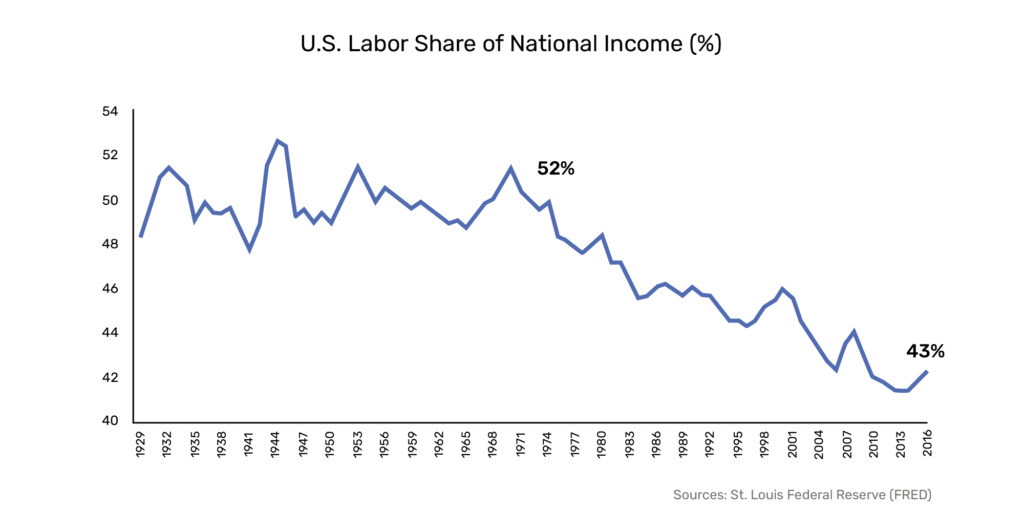 Before I get a roll of the eyes because no doubt this topic of “profits vs. labor” has become politicized, below is a chart illustrating the loss of labor’s share of their respective pies around the developed world since 1970. This is a global phenomenon, not a Democrat vs. Republican thing. 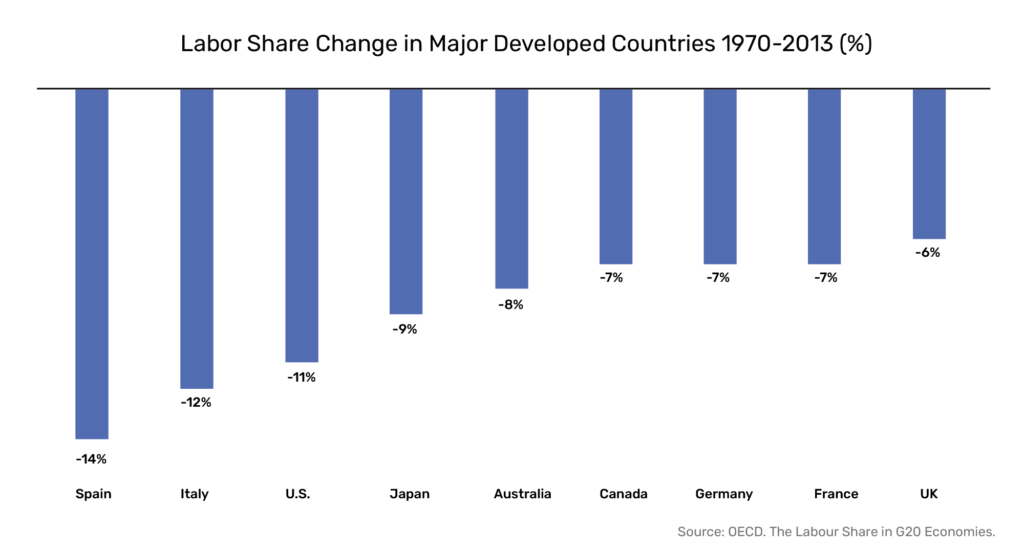 Outside of globalization as a culprit, why is this labor share drop occurring in the developed world? A reasonable thesis is provided by the International Monetary Fund (IMF), which argues that fast technological changes contributed to half of the drop, as new tech automated away a high share of “low skilled” jobs.

Just to be clear here, fast technological advancements and global economic integration have been key drivers of the global prosperity that we’ve witnessed since WWII. As Max Booth over at the U.S Council of Foreign Relations reminds us, the global population living in extreme poverty has declined from 84% in 1820 to 16% in 2010. Also between 1945 and 2011, the global death rate fell from 22 per 100,000 people to 0.3. During the same period, U.S average corn yields went from 2.5 to 10.7. Nevertheless, the data does seem to support that one of the costs associated with that progress has been a drop in labor’s share of the economic pie, here in the U.S.

For the wealthy: Income comes from capital, not just labor

So if American incomes are not going up much, how come their wealth is? Well, averages can be a bit deceiving. It turns out that the bottom 90% of earners in the U.S. used to own 33% of the total wealth in 1989. They now own 23%. Meanwhile, as the below chart shows, the top 1% of earners have seen their share of the wealth pie grow from 29% to 38.6% over the same period. Well, think about it, does the top 1% earn all their money from their labor, i.e. wages? No. As the 2013 Congressional Budget Office (CBO) report shows us, the top 1% earn 37% of their yearly income through their dividends and capital gains. In other words, for the wealthy, income doesn’t just come from labor, it comes from the assets they own. And the value of those assets is going up… a lot.

Bringing it all together

So despite the fact that the average American wage has been in a slump for the last 30 years, we have seen overall U.S. household wealth flourish. That wealth has been driven by a surge in asset prices. In the last decade, wealth was driven by a real estate boom, which benefited a wider portion of society because not all real estate is owned by the wealthy. In the last eight years, however, the driver of wealth has been a surge in the stock market, of which 94% is owned by the top 10% of earners. Top earners don’t generate their income just from their wages but from their investments. In other words, the wealthy earn money via price appreciation of the stocks they own, rather than solely on their wages, whilst everyone else relies on wages – which are not growing much.

Some argue that we should let the market “clear” this imbalance since government involvement will make it worse. Whilst others argue that we need policymakers to find ways to adjust who gets what piece of the pie before a mob does it for them. Next week we will take a closer look at the U.S. central bank’s attempt to adjust some of these imbalances. Have their efforts worked? Are there any unintended consequences? I will leave this chart as a teaser. 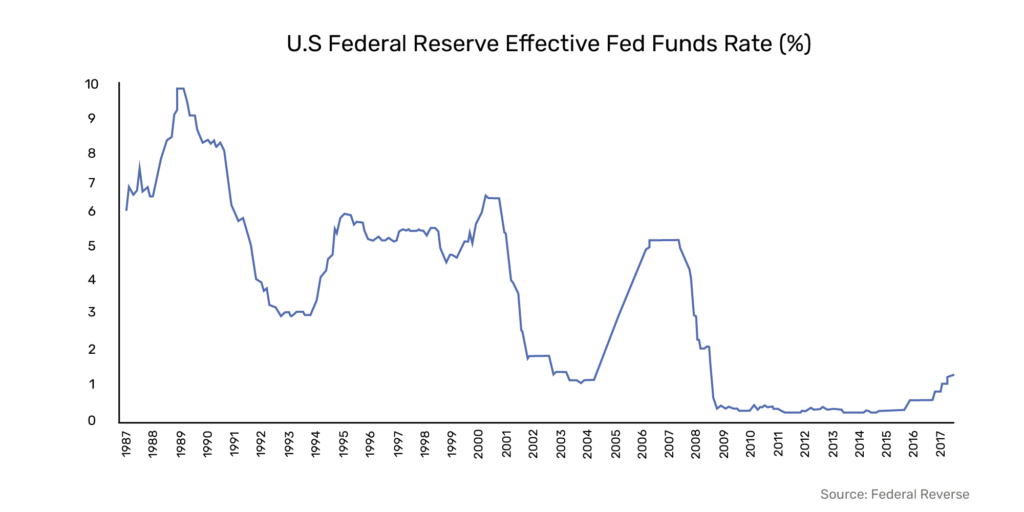 If you enjoyed this post, check out Is The Fed Leonard From Memento?

**The projections or other information generated by Zoe Financial, Inc. regarding the likelihood of various investment outcomes are hypothetical in nature, do not reflect actual investment results, and are not guarantees of future results

See The Top Local Financial Planners Near You