We’ve previously explained how North Korea came into being, as well as the main players and their incentives in this current nuclear situation. It is now time to go through the likely scenarios going forward.

I am not going to rehash the escalation of tensions during the last eight months – the point is that tensions are escalating. The focus of this blog is around strategic options that the U.S. could apply going forward… so here we go.

What are our options?

Post-WWII, the U.S. has used, to different degrees of success, the below policies when it came to international conflicts:

Let’s go through them one by one and discuss what they are and if any are likely to be implemented against North Korea. 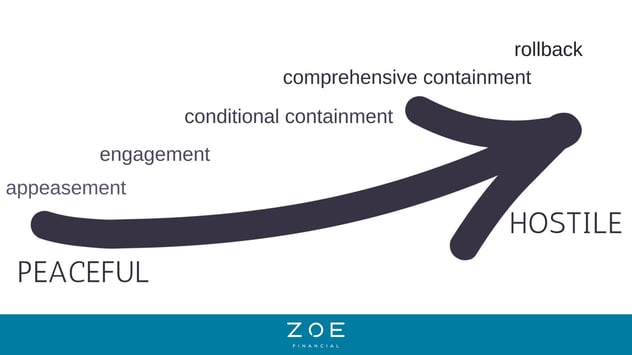 Appeasement is conceding to aggression from a war-like nation. The clearest example of this strategy in modern history was during the 1930s when Britain, France and the U.S. allowed Germany to take over the Sudetenland. The policy was based on the idea that if Hitler’s demands were satisfied, he would stop his aggression. As appeasement failed to prevent WWII, it came to be seen as a strategy to be avoided with military dictatorships, as it seemed to embolden them.

In the case of North Korea, appeasement would likely involve acknowledging that Kim Jong-un’s regime is a nuclear power without asking for anything in return, in the hope that he would become less aggressive as he would have then solidified a “seat at the table” on the global stage. In my mind, this is the most unlikely scenario as it would incentivize other players (like Iran or Russia) to further test the U.S. resolve.

Engagement involves deferring to diplomacy in order to resolve a conflict. It requires both sides to “play ball” fairly. President Clinton tried the engagement route directly with North Korea back in 1992, which resulted in the loosening of sanctions and a pause in the annual U.S. military exercises in the Korean Peninsula. In return, North Korea promised to return to the table to discuss a potential rollback of their nuclear program. The deal ultimately fell apart for a number of reasons, but remember, this attempt to engage was before North Korea had nuclear weapons.

Do we have any examples of the U.S. engaging with a “rogue country” after they became a nuclear power? Oh yeah, China, the now second largest economy in the world.

First, a bit of backstory on China. I didn’t want to get into it earlier, but China and Russia were never really BFFs. Yes, they are both communist and in the early 1950s, Russia and China were both on the same side of the Korean War. Russia even helped China build their own nuclear capabilities. But by the early 1960s Chinese-Soviet relations had turned sour for a number of reasons, and the Soviets stopped helping the Chinese to build their nuclear technology. Unfortunately, by that point, the Chinese had enough knowledge to continue the program.

By 1967, the Chinese joined the nuclear club by successfully testing a hydrogen nuclear bomb. China did this to ensure security against the Soviet AND United States threats, and to increase Chinese power internationally. It is possible that without China becoming nuclear, the U.S. and China would not have been able to open direct relations in the 1970s since prior to having their own nuclear powers, the Chinese had to get the blessing from Moscow to do anything with the Americans. So once China had proven nuclear capabilities, the U.S. strategy changed from containment to engagement.  In 1972 Nixon’s China trip was set in motion and China pivoted away from the Soviet’s team towards the U.S.

If the U.S. went with engagement, their goal would be to provide economic or political incentives to nudge Kim Jong-un to move back into the global community. In return, Kim Jong-un would have to freeze further development and testing of nuclear weapons. With tensions as high as they are at the moment, engagement does not seem feasible in the near term.

Although, in years to come, if Kim Jong-un is able to remain in power, the U.S could go for an engagement approach similar to the ones implemented with China in the ‘60s. In addition to convincing Kim Jong-un, like it did with Assad in Libya, that the U.S. would ensure the regime would stay in place if he played ball, the U.S would also need to convince him that North Korea would be better off dealing with the U.S. directly instead of relying on China or Russia. Over time, U.S. would slowly foster North Korean businesses and individuals so that their future would not be dependent on Kim’s regime.

Conditional containment is the old “carrot and stick” policy. Basically, a mixed strategy that incorporates engagement and comprehensive containment, simultaneously.

Conditional containment was the main U.S. strategy for the Soviet Union during the Nixon years. Instead of trying to roll back Soviet power in places where it already existed, the idea was to block the expansion of the Soviet influence, whilst simultaneously providing the Soviets with favorable trade terms and access to certain U.S. technologies. It worked from the perspective of keeping both countries from waging all-out war, but it didn’t really work in persuading the Soviets to change their strategies.

Despite the strong rhetoric displayed by both sides, one could make the case that conditional containment may still be a viable strategy with North Korea since like the Russians and the Chinese, it is now a nuclear state. The danger is that further escalation of military exercises makes this strategy less and less feasible as the days go by.

The U.S. track record with this strategy has been mixed. They applied harsh economic sanctions on Saddam Hussein both to coerce him into withdrawing from Kuwait before the Gulf War, and then to topple his regime after the war. Neither worked.

On the other hand, the harsh economic sanctions on Iran successfully lead to a deal that forced it to pull back from the continued development of its nuclear program. The main difference between Iran and North Korea’s regime though, is that Iran’s leadership does not have extreme and complete control of its people. For instance, as imperfect as they might be Iran still holds public elections and so the leadership cares what the general population thinks. In North Korea on the other hand, Kim has complete control of the media and its citizens’ every move which makes it tougher for the sanctions to actually affect him. The key to this strategy working is to gather as much international support as possible and work towards a very specific objective that directly affects Kim.

So far, this is the current U.S. policy on North Korea, and in my opinion, the most likely strategy the U.S. will apply going forward. The fact that the UN anonymously voted to provide harsh economic sanctions on North Korea further increases the chances of success.

The key factor will be if North Korea’s greatest trading partner, China, enforces the sanctions. Remember, from our first blog, that China’s sanctions are the only ones that matter, since close to 90% of North Korea’s global trade is with China. The country depends greatly on the Chinese for their oil consumption… and winter is coming. Additionally, North Korea’s funding for its military and to bribe its elite to remain loyal to Kim is funded from it’s exports. The issue here is that if we go on what history tells us (and the below tweet from former U.S. Treasury Department official, Anthony Ruggiero) China is unlikely to deliver on their sanctions.

However, if China delivers the tough sanctions, there is still a chance that Kim Jong-un’s regime survives them and then uses the sanctions as an excuse for his horrible economic management of his own people.

Rollback strategy does not merely seek to contain the target state within its borders but to overthrow its ruling regime by any means necessary. In other words, it aims to alter the status quo.

The 2003 U.S. invasion of Iraq under the premises of possession of weapons of mass destruction, is an example of rollback through military intervention. The same year, Libya’s Assad agreed to roll back its nuclear program after seeing what happened in Iraq. Through crippling economic sanctions, the U.S. forced Iran into a deal that rolled back its efforts to become a nuclear state. But for each of those examples that did work, there are a few rollback attempts that didn’t, like the U.S. failed invasion of Cuba and the Vietnam war.

This is a strategy that the Trump administration is threatening to use against Kim Jong-Un. In a rational world, a military mission is a no-go option for the U.S. at this point.

The main difference between what happened in Libya, Iran & Iraq and what is currently happening in North Korea, which makes a U.S. military rollback strategy unlikely is that North Korea already has nuclear weapons and the missiles from which to deploy them. As Robert S. Litwak reminds us “No country that has [successfully] tested a nuclear weapon has ever gone on to abandon its weapon program.” This would make for an extremely risky mission for U.S. forces because if they fail to destroy only one bomb, it would put the whole world at risk.

Based on historical precedent, I believe a rollback strategy through military force is highly unlikely, with the concern here that an unforced error by either side could lead down a road that no one wants to travel. On the other hand, an engagement strategy with this regime does not have a good track record and it has too much political risk for President Trump back home. Thus, The U.S will likely continue with its comprehensive containment strategy in the short term, with the long-term goal being an internal North Korean leadership “coup” resulting from the terrible living conditions of North Korean citizens. Or for Kim to change his ideology in order to remain in power. A new regime (or ideology) could then allow for a diplomatic engagement policy.  The key to success will be the U.S.’ ability to pressure China to implement stricter oil and banking import sanctions, with the goal to deter Kim from further from public nuclear tests.

Let’s bring it back to why I wrote this blog in the first place… to explain that from an investment standpoint, people should “do nothing” when it comes to the North Korean threat.

Hopefully, now you see why.

This conflict, like most geopolitical conflicts, is complicated and ever-changing. And even after 40+ hours of deep research, it’s difficult to forecast an outcome, even less a timeline. As such, investment actions driven by this conflict will likely leave it up to ‘lady luck’ to decide the investment’s outcome. A diversified portfolio with well-defined goals and risk parameters should be sufficient in buffering any major short-term risk, as discussed in our blog – North Korea: What are the investment implications?

If you enjoyed this post, check out Don’t Make Investment Decisions Based on ‘covfefe’.