A recent CNBC News segment caused an uproar, and a flurry of memes, as Berenberg Capital Markets reported US stocks are seeing a ‘kangaroo market‘. 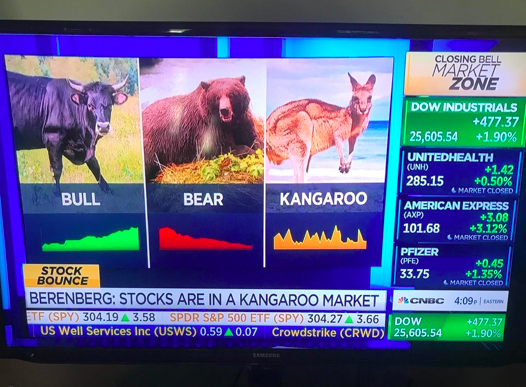 It was likely a pun on soaring market volatility, so not to be taken too seriously, but it’s worth evaluating where such a term might come from.

If you are familiar with financial markets terminology, you might have heard about bear and bull markets. The markets have been a zoo lately and the kangaroo is their latest arrival. So what is a kangaroo market?

What Is a Kangaroo Market?

In plain terms, a kangaroo market can be defined by the frequency of stocks changing value and “bouncing up and down” over a period of time, without any stable rising or declining trends. Note that “kangaroo market” isn’t an official term used by economists, but rather an intriguing new “slang” term. Since March, markets have been volatile, the main driving factor being the coronavirus pandemic.

How is a Kangaroo Market Different From a Bull or Bear Market?

Both bull and bear market describe markets from the perspective of how an animal attacks its opponents. A bull uses its horns upwards to hurt its enemies and a bear uses its paws downwards when attacking its prey. It could also be said that the bull represents the boom where the economy grows and the bear is the bust when it shrinks, in a boom and bust cycle. According to the National Bureau of Economic Research, on average, booms last 38.7 months, and the busts last 17.5 months, which are also known as economic recessions.

During a bull market, there is usually a 20% rise in the market over time as a result of strong demand for stocks, optimism, investor confidence, and expectations that results will continue over an extended period of time. It shows a strong economy that coincides with a strong gross domestic product (GDP), a drop in unemployment, and a rise in corporate profits. The most recent and also the longest bull market happened between March 2009 and March 2020, right after the 2008 Recession.

On the other hand, during a bear market, there is a 20% or more decline in the market as a result of prevailing pessimism and distrust in the market, caused by falling prices and investors retreating from more aggressive investment strategies, thus propelling the market lower. As share prices drop, there is a downward trend that is expected to continue over time. The economy is slowed down and unemployment will rise. The most recent bear market was between 2007 and 2009, during the 2008 Recession.

A kangaroo market is none of the above, mainly because downward or upward trends are not expected to last over an extended period of time. It is characterized by sharp rises and declines, but with the expectation that it will not last and will change within days, as has been the case most recently.

The National Bureau of Economic Research recently announced that the US has been in a recession since February 2020, almost the start of the alleged “kangaroo market.” This is described as the end of the peak in economic activity when it went from boom to bust. This time some might claim it is not a bear but a kangaroo market!

What Should I Do in a Kangaroo Market?

Volatility in stock prices can feel overwhelming. When the markets jump up and down, you may have the urge to make a decision based on short-term direction. But it’s critical to remember that the short-term direction of stock prices is close to random. No one has a crystal ball. It can be expensive and exhausting to try to time any market, including a “kangaroo market.” As we’ve noted in the past, smart investors are those who spend time in the market, instead of those who focus on timing the market.