At Zoe we interact with thousands of people every month that are looking for a great independent financial advisor to guide them through their big financial decisions. During the last few weeks, we have heard from a number of people that thought it appropriate to “sell stocks, since the bull market is now in its longest run ever.”

I began to write my take on this, but it turns out that Charlie Bilello at Pension Partners already wrote that piece and did a great good job at it here. I highly recommend reading.

Let’s start with the first part of that assertion:

Is this bull market actually in its longest run ever?

Well, it depends on what your definitions of a bull market and bear market are. For some arbitrary reason, we all believe it to be a +20% increase and a -20% drop. What about the time the market fell -19.4% in October 2011, should we not count it because of the rounding error? If we consider that to be a bear market then we are really seven years into a bull market instead of nearly ten years in.

Ok, but let’s assume that we don’t count 2011. In that case, the U.S. stock market has been rising since its March 2009 lows to today’s levels without seeing a 20% correction. That’s 3,447 days. That’s a long time. The longest prior streak was between October 1990 and March 2000 (which ended in the tech bubble). The media is having a field day with articles like this one from the Wall Street Journal or this one from MarketWatch so the recent concern is not surprising.

Let’s say you went back in time and got out of the stock market every time the length of the bull market was the longest ever, and only buying back in after a 20% decline. How would such a strategy have fared? Going back to 1932, $10,000 invested in this timing strategy would grow to $11.6 million today versus over $139 million for buy-and-hold. -Charlie B.

So… selling stocks because the bull market becomes the longest bull market ever and timing it perfectly to get back in after it fell -20% has failed miserably as an investment strategy. You would have been better off just staying invested (by a long shot).

It’s also worth noting that although headlines make it feel like this market just goes up without any market falls, check out the chart below from my old team at JP Morgan. It looks at the biggest intra-year market declines over the last 38 calendar years. As you can see, in 2011 we saw a -19% drop, in 2012 a -10% drop, in 2015 a -12% and just this February a -10%. None of those drops felt good, but they were easily forgotten by the media who runs in a weekly news cycle. 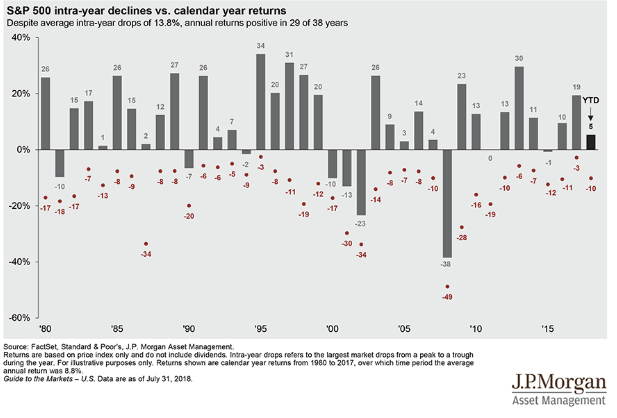 Yes, this bull stock market has been going on for a long time. And while the data shows otherwise, recent headlines make it feel like the market has been going up in a straight line. So, should you reduce your stock allocation in your overall portfolio based on the age of the bull market? No. Is it possible that in your specific circumstance it makes sense to currently reduce stocks as part of your asset allocation? Maybe, but that’s for you or you and your financial advisor to decide. But do not let the headlines dictate your strategy. Ultimately, personal investment decisions should be based on YOUR goals, YOUR risk capacity, and YOUR risk tolerance.