Those that know me well know that I’m a HUGE Seinfeld fan. In fact, I sometimes even imagine how my own day-to-day life would play out in an episode of Seinfeld. For instance, the other day my friend was telling me about how his current girlfriend uses way too many emojis in their text conversations and I immediately thought to myself: “Jerry would break up with a girl for this kind of thing!”.

I often watch reruns in my free time, a recent one being “The Opposite”, an episode in which George realizes that every decision he has ever made has turned out to be wrong and that his life is essentially the exact opposite of what it should be. Jerry tells him “if every instinct you have is wrong, then the opposite would have to be right”. This is when George starts to behave in the opposite way to how he normally would, to the point of telling a beautiful girl in the restaurant, “My name is George. I’m unemployed and I live with my parents”, which, to his surprise (and everyone else’s) actually works. 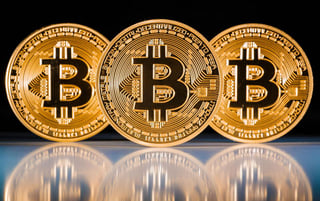 I was reminded of this episode as I read a newspaper article on the recent meteoric rise of Bitcoin. Now if you’ve been living under a rock and don’t know about Bitcoin, here’s an article that I think does a good job explaining it. Essentially, it’s a digital currency based on an underlying technology that has tremendous potential to be used for a number of different purposes.

What’s unique about Bitcoin is that it is “decentralized”, meaning it’s not tied to any governments like other currencies. Bitcoin trades are tracked on a Blockchain, which is a digital ledger that some people are calling a game changer. It’s a long rabbit hole to fully understand Bitcoin and the Blockchain, but if you’re interested read here and here.

In short, the technology around Bitcoin and its potential uses are considered by some to be as revolutionary as the internet – helping push the value of 1 Bitcoin to over $2,500, up from $660 12 months ago.

There are a ton of articles about a kid who bought some Bitcoin a few years ago and is now a millionaire, and some people even think that the price of a single Bitcoin could hit over $100,000.

Now, I’ll be the first to admit that I have no idea whether Bitcoin is going to go up, down, or sideways. That said, I’ve been trying to figure out whether or not I should invest a small portion of my own money into Bitcoin, just to try it out. I mean, who doesn’t want to be a millionaire after a few short years?

If so many people are buying into this, it must be going up for a reason, right?

Well yes, it’s going up for a reason but it remains to be seen whether it’s going up for the right reason. For every article that talks about Bitcoin further increasing in value, there’s another (like this one) saying that soon the bubble will burst and Bitcoin’s value will crash, since it doesn’t have anchors of valuation based on cash flows, profits or tangible assets like stocks, bonds or real estate.

But what do we mean by bubble?

An economic bubble is simply the rapid growth of an asset’s value, followed by a strong contraction or “crash”. This has been seen many times over, as far back as 1634 when Holland went through “Tulipomania” and the trade of tulip bulbs by the wealthy as a luxury good, created a massive demand for rare tulips, almost overnight. These rare tulips saw prices soar 20-fold from the year prior. Eventually, tulips reached a price that very few were able to pay. By that time, collectors realized that the drastic price increases were unsustainable and eventual panic set in driving the price of new tulips down so quickly that the Dutch authorities had to step in, to settle tulip contract agreements. The proverbial Tulip bubble had burst.

Most recently, we experienced the US Housing Bubble of 2008, where from 1996 to 2006 US housing prices nearly doubled, only to collapse in the 2007-2009 period. A number of factors including subprime lending and mortgage fraud led to the bubble bursting, which sent the global economy into a recession, the extremity of which had not been seen since the 1930’s Depression.

What Causes a Bubble?

Of course, hindsight is 20/20 vision and it’s much easier to look back at these crashes and see what caused them. What is much harder to do is predict when the next will happen. That said, there are 2 factors that come with every bubble.

The first is lack of fear.

A lack of fear that a particular investment will decrease in value is the first thing that comes with a bubble. Generally, most investors are not afraid to take the risk to continue investing and often justify its dramatic growth in value with irrational logic.

The second factor is greed!

There’s an old saying: “pigs get fat, hogs get slaughtered”, which essentially means that it’s okay to aspire to make money, but being too greedy can lead to financial ruin. One of the main drivers for a bubble is greed – and for good reason. Everyone making huge returns on an investment, combined with a lack of fear that the investment will decrease in value, often has the makings of a bubble.

Now, these factors alone don’t mean that a bursting Bitcoin bubble is on the horizon. In fact, a drop in Bitcoin’s value is just as possible as a rise in value. What’s important for an investor though, is to always account for the risk that comes with investing and not to let the desire to make a quick dollar guide your decisions. This might be a good time to remind yourself about George Costanza’s success playing the opposites. If your emotions and greed are telling you “I want to ride this wave of euphoria”, then maybe you should be doing the opposite.

If you enjoyed this post, check out It Is Impossible To Beat The Market