Name something you never expected to be dominating the entirety of our media! We’d bet there are quite a few odd items on the list,  but the oddest by far is toilet paper. For many, it’s puzzling to find that vast quantities of toilet paper are being stockpiled across the world, as concern over COVID-19 grows and more people are confined to their homes.

Images of empty toilet paper shelves and shoppers with carts brimming with rolls have quickly taken over the news and social media networks. While we’ve read plenty of reports on the psychological reasoning behind the TP panic that has swept over the United States, there’s little out there on the numbers around the toilet paper craze and what might happen next.

Could it really be possible that we need that much toilet paper?

According to Statista’s Consumer Market Outlook (2018) the U.S. leads the world in toilet paper consumption, with the typical American getting through 141 rolls per year. 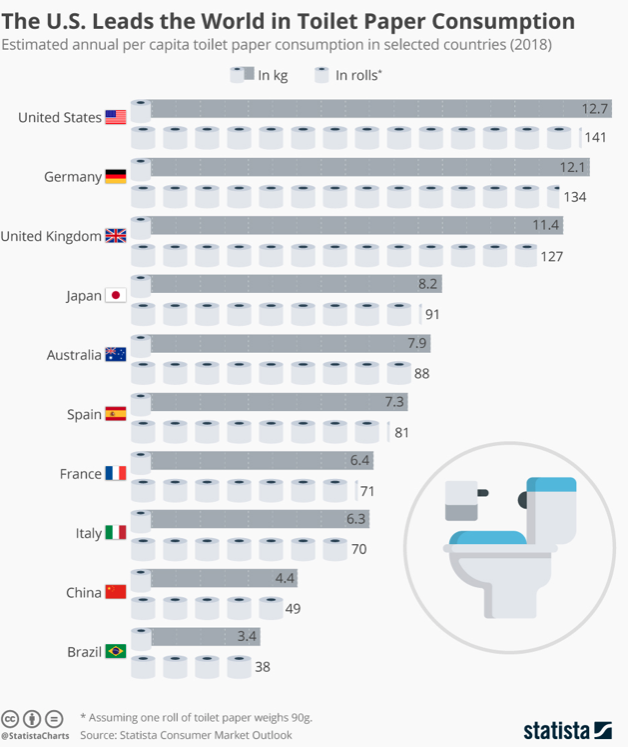 To dig a little deeper: on average, a traditional 2-ply roll of toilet paper lasts approximately five days per person. Of course, that depends on your bathroom usage, but consumers use approximately 9 sheets of paper per toilet use and end up using nearly 57 sheets of toilet paper per day! Note that this calculation assumes you’re a typical American using the restroom around 6 times a day.

As there is little data on the most bought toilet paper pack size, we’re going to base our consumption and duration calculations on a 12-pack of 2-ply toilet paper. Assuming it takes the average American five days to get through one roll, in a month they would have only used half of the traditional twelve pack! For a family of four, for example, the average role would last about a day and a quarter, so the family’s twelve pack would last at least two weeks.

Will we actually run out?

No, for two reasons. Toilet paper will continue being produced and it is highly unlikely grocery stores will close. The impulse to overbuy comes from the concern that the store will be closed or there won’t be enough, both of which are largely irrational.

Toilet paper supply chains are so constant that major manufacturers have fine-tuned demand relative to supply. As there is nearly never a spike in toilet paper demand, factories efficiently produce the quantity needed to meet consumer’s purchases. Unlike other currently high-demand products such as face masks or hand sanitizer, it would be highly unusual to see a spike in need. Particularly considering COVID-19 has very few incidences of gastrointestinal distress as a symptom. 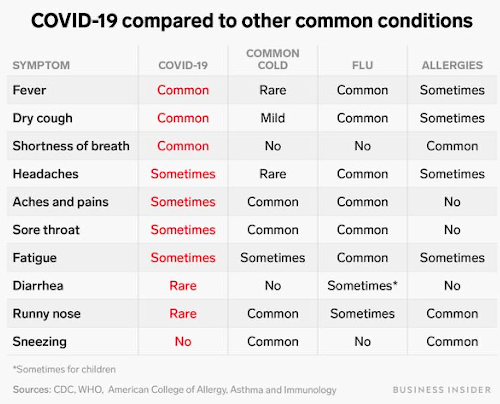 According to the Los Angeles Times, other countries with severe outbreaks of COVID-19 have not seen severe grocery store shutdowns nor a disablement of logistics and paper industries. Both Italy and parts of China experienced full shutdown, yet essential products were still produced by factories.

Over 90% of the toilet paper used in the US is produced domestically and that ease of production means your local grocery store shelves will be stocked in no-time! Daniel Stanton, a supply chain expert and author of Supply Chain Management for Dummies, told CNBC, “All the grocery stores are going to have pallets of toilet paper sitting in the aisles, and nobody is going to buy it, because who needs to buy toilet paper when you’ve got a year’s worth sitting in your garage?” So, if you’re someone who is now stuck rationing toilet paper because you didn’t make it to the store in time, worry not!