Amid storms of dreary news, the $2.28 trillion bipartisan coronavirus stimulus package seems, at first glance, like the much-needed aid the country needs. With so much at stake, it is crucial to understand how it will help this public health emergency and the economy.

As the Emergency Responses Phases chart shows, government financial initiatives are usually applied in the “response” and “recovery phases” during Pandemics. The government has two main financial tools for the response and recovery phases of a natural disaster: fiscal policy, through which it determines the appropriate level of taxes and spending; and monetary policy, through which it manages the supply of money.

The government healthcare “response”  to slow down the Coronavirus speed of contagion has been to set social distancing guidelines and mandate mass lockdowns. These healthcare initiatives are absolutely necessary to save lives, but the economic collateral damage is shutting down a lot of economic activity. Due to this impromptu economic shutdown, Americans will soon see a recession.

Is This Our Generation’s Great Depression?

The swift closing down of the economy is something that this country has not seen at this scale in modern times. As the chart shows below, the coronavirus puts 37 million U.S. jobs at risk, those of which are mostly low-wage and thus have a thin safety-net. From the job market’s perspective, this could be the most severe recession in our country’s history.

Having said that, the recession’s duration and breadth are unlikely to be a “Great Depression” type magnitude. To provide some context, the below chart shows past recessions throughout history. The size of each circle shows the severity and the Y-axis the duration of the recession. As you can see, there is a big difference between the Great Depression in the 1930s and the Great Recession in 2008-09, both in duration ( 3.5 vs 1.5 years) and severity (-26% vs -4.5% economic contraction.)

The main difference between the Great Depression and the Great Recession was proactive efforts by the government. In 2008, the government worked to maintain levels of employment and stable prices, while that was not the case in 1929. In fact, in 1929, social security, Medicaid & Medicare, FDIC insurance or unemployment insurance simply did not exist. From that perspective, the government’s swift new measures to provide a “floor” to the economy through both its fiscal and monetary policy are social safety nets that did not occur during the Great Depression.

Even when comparing this recession to the Great Recession of 2008, there are stark differences. As the Brooking’s Institute points out, the Great Recession resulted out of financial imbalances—starting primarily in the housing sector. Meanwhile, the Coronavirus pandemic is a totally external factor. For government economic policymakers, there is another big difference. In 2008, there were delays in passing stimulus packages as many worried that remedies such as mortgage relief or bailing out the banks would encourage people to make and take riskier loans in the future, confident that the federal government would bail them out if things went wrong. “Moral hazard“ is simply not a concern this time around; as no one will wish for a virus in the future in the hopes of receiving government aid. In other words, there likely will be less legislative roadblocks if more aid is necessary this time around. With this historical context in mind, let’s now dig into the Fiscal and Monetary policy packages.

Fiscal policy is implemented through Congress and the Presidential branches of government.  Since the Great Depression, U.S fiscal policy has enacted a more “counter-cyclical” approach by spending more in recessions to soften the blow to the broader economy. Over the last few days, Congress and the President took this approach by signing the $2.28 trillion coronavirus stimulus package, Coronavirus Aid, Relief, and Economic Security Act (CARES Act). The CARES Act is the largest rescue package in American history. As per the below visual, the package will have wide-reaching impacts. It will send money directly to Americans homes, small businesses, and greatly expand unemployment coverage among a number of other initiatives. 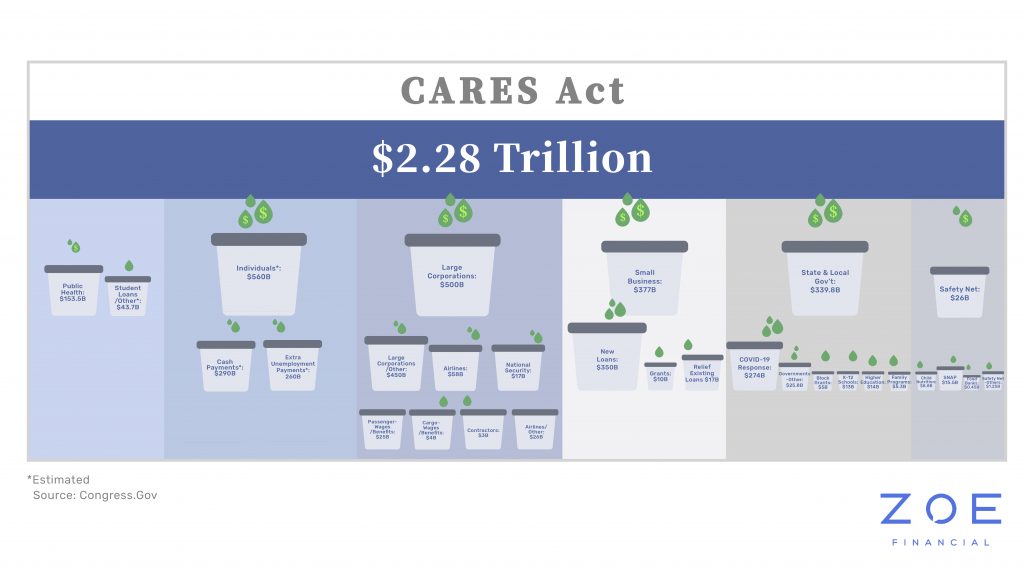 Central Bank to the Rescue

Monetary policy is implemented through the Federal Reserve System, an independent U.S. government agency. The “Fed” as it is often called, has three main tools for maintaining control over the supply of money and credit in the economy.

Since the Great Recession of 2008, the Fed has a slew of new tools to keep the financial system functioning in times of emergency. When facing the Corona pandemic, the Fed acted swiftly to implement all the existing emergency initiatives, as well as creating a number of new ones,  per the below chart.

When placing the recent monetary and fiscal emergency responses in a historical context, it is fair to say that the government has moved swiftly and boldly to pass these initiatives into laws. Having said that, we are dealing with an emergency of a scope not experienced in the modern era, so it is difficult to evaluate if the economy will need more in the near future.

For instance, as Augustin Carstens, the General Manager of the Bank for International Settlements, pointed out, this time around the central bank’s interventions to quell the crisis will need to reach individuals and businesses who are the core victims of the natural disaster. The ‘last mile’ of this channel is not yet in place and needs to be bridged with urgency. If current initiatives are not implemented quickly, more might need to be done later to deal with the negative effects of being too late the first time around.

As we continue navigating the impacts of the coronavirus government stimulus package, we need to be keenly aware that it impacts every American’s finances differently. Be it a small business owner or an individual seeking to understand how this will affect their wallet, our next blog will evaluate the singular impacts for you.