U.S. households reached a record net worth of $96 trillion in the second quarter of this year. It is the seventh consecutive quarter in which we have reached new levels of wealth as Americans.

The chart below represents total household assets, liabilities, and net worth, with net worth being the difference between what Americans own (assets) and what they owe (liabilities). We can see that in the 2004-2007 period, the majority of the growth in American’s household net worth was a result of tremendous borrowing, which, in turn, inflated asset prices. If you recall this was the housing boom. Now check out the 2011-2017 period – American wealth skyrocketed even though borrowing barely increased. 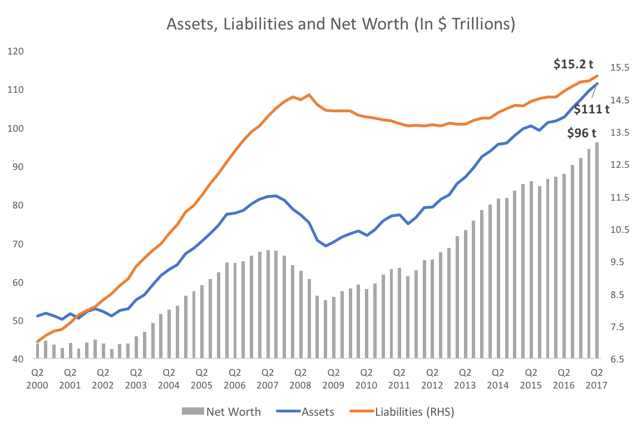 What gives? Well, as the chart below shows, this time around American wealth hasn’t been driven by surging home prices. This time, wealth has been created by a surging stock market. 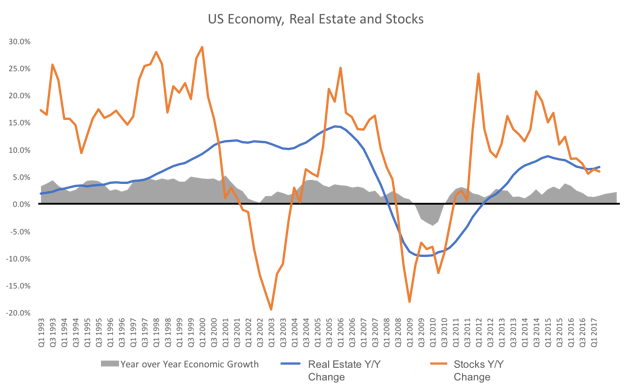 From an economic standpoint, a wealthier American household is important because of something called the wealth effect which measures how fluctuations in household wealth influence household spending. Consumer spending accounts for 69% of our economy, so yeah… if you buy more it affects the economy a fair bit. The logic behind the wealth effect goes something like this: If the value of your home goes up, you feel richer and it makes you more optimistic about the future. So, you go and buy your kid those private tennis lessons she’s been wanting. The tennis instructor gets the new business and takes his family to dinner at a nice restaurant to celebrate… around and around we go creating a virtuous cycle that helps the economy grow.

A stock boom is less inclusive

In fact, a new Federal Reserve consumer finance survey estimates that as of 2016, roughly 90% of stocks were owned by the top 10% percentile income earners. So the middle-class homeowner benefited much more from the real estate boom in the last decade than they are from the current stock market boom.

So when we look under the hood of American wealth, stocks have been the driving force over real estate for the last few years. The wealth effect from stocks doesn’t affect overall consumption much, as they are mostly owned by the very wealthy. But regardless if we are talking about the value of stocks or homes, is the wealth effect the biggest driver of consumption? Well, unless your dad is Bill Gates, your salary is a much bigger driver of your spending than your net worth. Stay tuned as we take a closer look at how American wages are fairing.

If you enjoyed this post, check out Wealth vs. Income.